Email ThisBlogThis!Share to TwitterShare to Facebook
Going forward with Tinky's Loving Local Blogathon, today I'll talk a little about the home garden in Massachusetts.  Or more specifically, my home garden.  August 22-28th is Massachusetts Farmers Market Week.  Over 70 blogs are participating to grow awareness to locally grown food and Mass Farmers Markets.  Farmers Markets are few and far between on Sundays (especially compared to other days of the week) - so I'm focusing on something even more local than MA farms today - my own backyard. 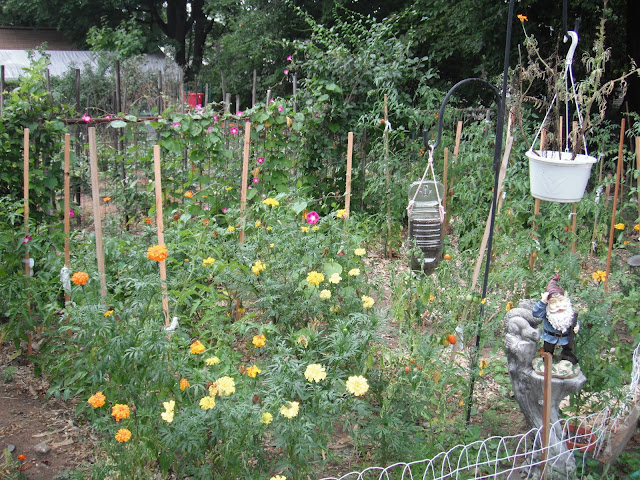 Welcome to My Garden!
**For any future home gardeners out there - a garden is not a garden if you don't have a garden gnome!**

This is my 3rd year "gardening".  My first year consisted of me buying about 8 plants at Lowe's and just shoving them in some dirt.  Last year, I put some more care and consideration in what I was doing by prepping the soil some.  This year, I decided to start everything from seed (including marigolds).  My tomatoes have done the best this year (I planted Romas and Cherries).  My squash and cucumbers got infected with some disease and before I knew it, all the plants were dead.  I planted jalapenos (which are doing great) and green bell peppers (which aren't). 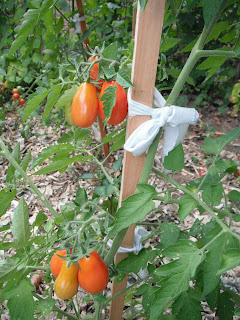 I actually never really paid attention to different varieties of tomatoes until last year.  I had a recipe that called for Roma tomatoes.  I don't think I ever even bought Roma tomatoes before then.  But come to find out, they are less juicy than "regular" tomatoes.  I've been buying them ever since.  That inspired me to grow some. 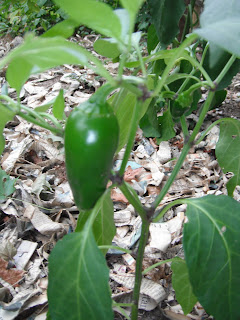 When I was plotting out my seed purchase this year, my husband chimes in that he wants jalapenos.  I thought I was setting myself up for disaster - but they are actually doing pretty well.  We have picked about 12 so far. 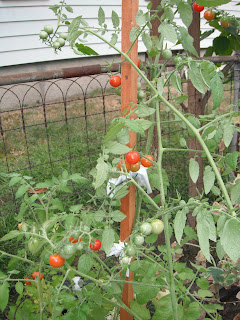 Cherry tomatoes are great.  They are relatively easy and taste great.  Another benefit to them is that my kids will go out there and pick the red ones - and just eat them!  It's not that easy to get them to eat produce when it comes out of plastic container.  I planted about 8 cherry tomato plants relatively close to each other after reading some stuff on "cluster gardening".  it kind of looks like I have one big cherry tomato bush.  I thought they would kill each other being so close (root battle or something like that) but that didn't happen. 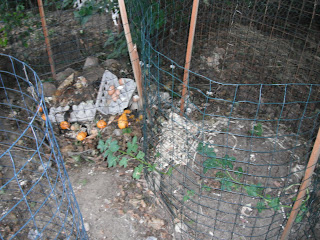 I've been composting for about a year and a half now.  I started with just one old garbage can and drilled holes in it.  This spring, I changed over to a 3 bin system.  I used some old wire fencing that was left in our yard when we bought the place 2 1/2 years ago and some long wooden stakes that my husband cut for me with scrap wood from the basement to make circular containers.  It's a relatively easy process and doesn't smell or attract animals like some may believe.  Pretty much, I just dump our produce scraps/lawn waste/leaves in bin #1.  I'll cover it with some dirt or other compost.  Once a month, I shovel what is in bin #1 to bin #2.  And the bin #2 goes into bin #3.  After three months, the stuff in bin #3 is pretty much all decomposed and ready to be placed in the garden.

So why do I compost?  Looking into making my garden more fruitful and vibrant last year, I realized that fertilizer and such is expensive (but I'm cheap - that's why I have a "bargain" blog).  As a kid & teenager, my father would compost. I always thought it was "gross" and "nasty" - but I had a little background in the process because of him.  So since I didn't want to shell out money for "good dirt" - I started composting.  It hasn't cost me a single penny, but I have to say, the soil in my garden is a heck of a lot better than it was when I plopped those plants into it 3 summers ago.  It's just going to keep getting better.  I'm also saving a lot of room in my garbage bags by not throwing produce scraps away (watermelon rinds take up a LOT of room!).  This in turn is saving me money on garbage bags (yes, I really am that cheap).

I have to say though, gardening can be very time consuming.  But if you like doing it, it's worth it!  Although I'm not a very good gardener (yet!), I have learned a lot about the processes by talking to neighbors & family and also by reading books and internet articles.  I only have about 1/7th of an acre of land - but even with that little lot, we're able to produce some great vegetables for our family to enjoy!

Be sure to come back later in the week as I check out other Farmers Markets around the South Shore!
Posted by Unknown at 5:44 AM

I have no idea how to garden but next spring I want to start one.

I have recently started an indoor worm composting bin so that I can add it to my garden next year and hopefully it will make it harder for me to kill my plants.

My three year old son loves worms and it makes it easy for lazy me to get rid of fruit/vegetable scraps- I just go into my laundry room and put them in the bin. The worms take care of the rest. I actually like my worms better than my two dogs and guinea pig because if I forget to feed them for a week they won't die.

I am writing about my worm composting journey if you're interested (I am not a tree hugger though my husband thinks I am slowly going to the dark side)
http://justcallmecheap.blogspot.com/2010/08/my-journey-into-worm-composting-worms.html

Gorgeous garden! Please do let us know when your posts go up so we can link to you.
lovinglocal AT earthlink DOT net.
Tinky
for the Blogathon

Great idea for using the wire for the compost bins. I've been trying to get myself to compost, so that sounds like an easy way to do it. I will have to after the fall and I rip everything out of my garden!

Erica, I had a beautiful worm bin when I was living in California last year. I passed it on to a friend when we moved. I just found out that I have one coming my way. What comes around, goes around, even with worms! I'm looking forward to vermicomposting again! I'll check out your blog. It's such an interesting thing to get into (even though most people think it's gross!).

This is so cool! You're lucky to have the room for all this. My 2'x3' garden and I are green with envy. Like the commenter above me, I tried a worm bin once. I wasn't a very good worm bin owner, though, and the end was tragic. And wet. Very, very wet.

I love your post and I wish you luck with the remainder of the season. We are blogging in the blogathon too, over at The Bitch Stopped Cooking. I love seeing posts in the blogathon because it is all stuff that is accessible to us because the posts are all local. I look forward to reading more!

Becky your garden looks so AWESOME! I am jealous! I didn't get to plant a garden this year because we moved from Maine to Colorado. But I am sure enjoying the great fruits and veggies here from neighbors, family and farmers markets.

Your garden is awesome what a green thumb you have! Great job.

Promote Your Page Too